The purpose of this article is to present several technical design concepts implemented and proven to work well for over one year, since the first release of the Mac version of LiveChat operator application.

Back in 2010 when I started implementing the Mac version, the main task was to reach the feature level of the Windows version (developed for several years) as fast as possible, and also to prepare ground for an upcoming iOS version (available now in App Store). At that time I neither had access to the Windows version’s source code, nor was going to reuse any of it. Therefore I have settled the following constraints that yielded the following results (described in detail in following sections): 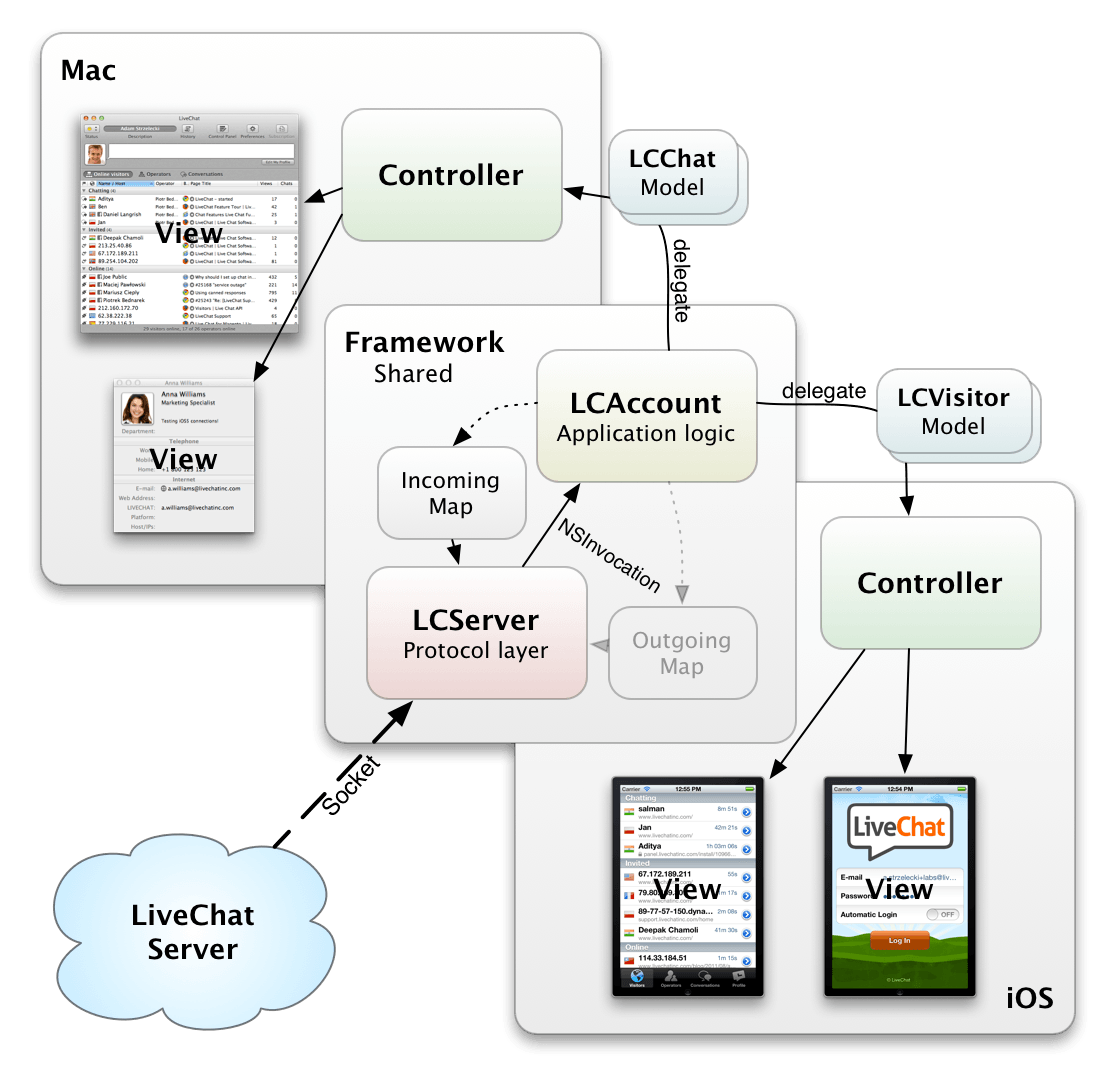 1. Source code must be divided into a framework part and GUI part

Where the framework part should contain most of the application logic and use API available on both Mac & iOS platforms, while the GUI part should be reduced to a minimum. Altogether it should match Model-View-Controller architecture.

2. Source code should be self-describing and object-oriented

Protocol.framework contains most of the application logic, manages creating and releasing model objects of LCVisitor, LCOperator & LCChat classes, and supplies GUI controllers with them. It contains LCServer private class which is responsible for “message to protocol command mapping”. Applications’ controllers are delegates of LCAccount class.

Mac version may dynamically follow model object’s state updates via Cocoa bindings (not available for iOS) without a need to manually process delegate methods. Therefore, for example inspector pane uses only bindings to update its contents, without actually knowing that it is part of complicated program logic. Inspector view contains just a layout and names for model properties presented to the user.

These libraries were published open-source and are known to build on several other platforms than OSX & iOS. Therefore in theory this code is portable to other platforms as well. Unfortunately source code of CFNetwork is no longer updated. Last available version matches OSX 10.4.11 Tiger.

Moreover CoreFoundation on other platforms is stripped from some functionality (named as CFLite) and latest releases have serious build problem on non-OSX platforms. There are several efforts to bring OSX API to other platforms, i.e.: OpenCFLite & PureFoundation fixing and extending CF & CFNetwork sources, Cocotron redoing whole Cocoa API.

While LCAccount translates messages received into model objects, LCServer class is responsible for translating textual protocol commands to Objective-C messages sent and received by LCAccount. LCServer class implementation is really small in comparison to other classes.

Once LCAccount wants to initiate server communication using LCServer, it needs first to provide protocol command to selector maps: (1) incoming map mapping to LCAccount methods, and (2) outgoing map mapping to LCOutgoingMethods protocol. LCServer is the lowest level class that works directly with sockets. Without going into details LiveChat protocol resembles MSN and thanks to its linear (non-structural) construction it is possible to implement such mapping.

Given that following incoming map is provided:

It supports all basic types such as BOOL, NSInteger and NSString. It also supports NSArrays for more advanced callback based commands (beyond the scope of this article). Altogether, calls when receiving following message: R0004|12341|Hello!|Joe|2134|0<LF>

Where called method has the following signature:

Of course this method is not called directly (like presented above), but in fact LCServer:

LCServer also handles situations when there are too many or too few arguments received from the server:

Sending protocol commands to server is done in an opposite way. This time LCServer acts as OO proxy to LCAccount that provides methods mapped to protocol command and handled via Objective-C message forwarding mechanism implemented by:

Once LCAccount provides LCServer an outgoing map and proxy interface:

Protocol commands themselves must be linear (non-structural). Some recently added LiveChat protocol commands have structural arguments that must be parsed separately via external parsers, like XML parser for add-on action commands.

I believe it would not be possible to easily implement solutions described in this article with other API and languages such as C++ or Java. Unfortunately I observe that Objective-C dynamic facilities are less and less utilized by recent Mac OS X (Cocoa) and iOS (Mobile Cocoa) releases and newcomer developers. For example iOS (Mobile Cocoa), which is kind of a rewrite of OSX Cocoa does not implement bindings, like if they were considered deprecated.